Afissos is a peaceful fishing village situated at the Pagasitic Gulf. It is amphitheatrically built, really picturesque and is surrounded by three attractive beaches: Kallifteri, Lagoudi and Abovos. 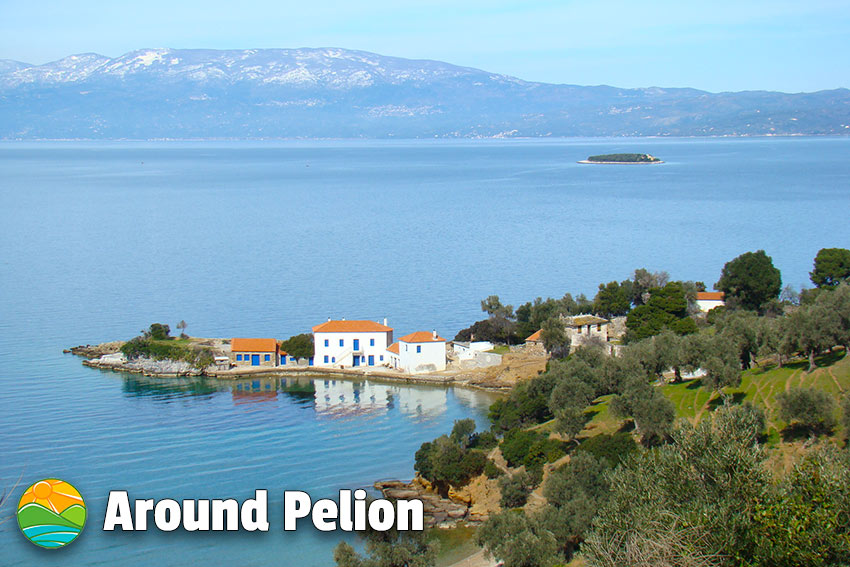 Full of flowers, calm waters and a lot of tourism in the summer are typical for this village. The village radiates a cozy and relaxed atmosphere by its small streets and beautiful shady square that is bisected by a small stream, so that two bridges give this typical square a romantic aspect. More south of Afissos, immediately by the sea, lies the picturesque village named Lefokastro.

It is hidden between the hills with beautiful olive trees and calm sandy beaches who invite the visitors to spend relaxed summer holidays.To go more south, you have to go first into the inland before the coast appears again.

Here the nature is described as a Toscana landscape.Argalasti is one of the biggest villages of South Pelion. From here it is very close to the magnificent sandy beaches Potistika, Melani and Paltsi.

The following two port-villages are Horto and Milina. In Horto, the smallest one, nothing has changed in thirty years. At the end of August, the open air theatre at Horto is the setting for cultural events which are famous all over Greece. During the summer Milina is full of life, although it kept a lot of its old atmosphere. It has, without exaggeration, one of the most beautiful sunsets in Greece.

On the way to Trikeri an unexpected miracle called Tzasteni appears after the bend. The scenery emerges between two patches of sea and is reflected in the water.The last village at the south side is Trikeri.

The many white houses are characterizing this mountain village. The port of Trikeri lies a bit further on and is called Agia Kyriaki. Here it seems the time stood still. The taverns here are situated at the sea and are offering fresh fish everyday.