Kissos is one of the most beautiful villages in all of the Pelion Peninsula, and it is a perfect place to visit all year round. As well as being a village of extreme splendour, it is also home to the most famous Basilica church in all of Pelion. The church of Agia Marina (Saint Marina) can be found in the large paved square of the village. 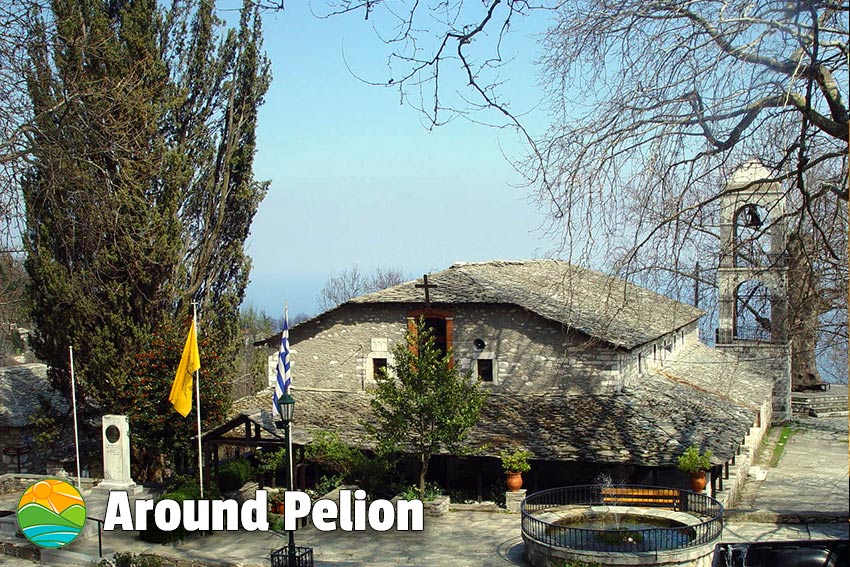 History of the Church

The church of Agia Marina is a three-aisled basilica dating back to the 17th century. The church was built in 1650 while Greece was under the Turkish occupation. The large size of the temple and the fact that was built in the main square of the village indicates that was built with Turkish permission.

This style however was forbidden during the Turkish reign because it was a much more impressive place of worship than their own religious structures. It should also be mentioned that in the village of Kissos, which is the location of this church, a silver mine was discovered.

In the olden days, when the villagers were talking about gold and silver, they were saying k'sos and argiros, which stood for "Chrisos" - Gold and "Argiros" - Silver.

From the villagers using these words, the name of the village, Kissos, was probably derived, although some maintain that the name came from the "Ivy" that grew in abundance in the village. Probably the craftmen used material from this mine for the plating of the iconostasis.

The iconostasis inside the church was built in the 1700 – 1720 by technicians from Hepirus using lime wood. It has internal carvings and was gold plated in 1793, as is reported on the north gate of the Iconostasis. Tradition says that, it took 60 years to complete the carving on the iconostasis.

The hagiographies and frescos on the temple date from 1802 and were made by Konstantinos Pagonis of Hionaditi, as reported on the first right pillar of the temple (which is the men’s section).

The frescos have theological content, but are given in free performance by the artist. The content of certain hagiographies while it is theological, is supported however in the free output of painter.

On the frescos are topics from the New and Old testament, the Revelation, from Natural History, and geography. The reason for this variety of topics was due to the fact that the temple also functioned as secret Greek school, whilst Greece was under the Ottoman domination.

The church has three sides to its roof and that is why it has the name Triklitos Basilica. There are also four interior domes on the ceiling inside the church, and these are decorated beautifully by the famous painter Ioannis Pagonis, who painted all of the frescos in the church.

On the first dome, which is situated near to the exit, Agia (Saint) Marina is illustrated, and surrounding this image are various scenes from her life.

On the second you can see the Virgin Mary Panagia, with scenes from her life illustrated around the perimeter of the dome. On the third dome you can see the Pantocratora Christ (Lord of all Jesus Christ).

On the fourth dome there is a painting that illustrates God as an old man. At this point, it must be made clear that nobody knows exactly what God looks like, and we cannot accept this image of an old man, because this image could show that God is perishable.

However, the image of an old man is acceptable because this represents a very wise entity. Only Michael Angelo dared to perform the graphical depiction of God on the famous fresco "Creation" at the Cappella Sixtina in Italy.

At the entrance of the temple the architecture and the beautiful wooden carvings on the iconostasis will impress you. The iconostasis in the temple is where all of the icons are placed on. The artist used lime-wood because it is soft and easy to work complicated patterns on the wood. Also its very durable and can last for many years.

On the iconostasis you will see beautiful carvings and illustrations of a large selection of animals and vegetation all representing nature. There is also one interpretation of Noah's Ark. On top of the Holy Gate, we can see Noah lying down and relaxing.

At the center of the Holy Gate, we can see a mermaid (taken from Ancient Mythology), which illustrates the mermaid turning all of the bad elements to stone and keeping them out of the Holy grounds. On some of the other icons we can see some large birds, with curved beaks. Hanging from these beaks are the olive-oil lamps. The entire iconostasis had been plated with gold sheets.

The iconostasis was created during the 17th century. Work began in 1720 and was completed approximately 60 years later. The gold plating took place in 1793. This magnificent iconostasis in the temple was assembled by craftsmen from Hipiros. In some sections holes were purposely created so that sunlight can enter through the back windows.

The name of this style is called "Skiaroskouro" (which means to move shadows). On the iconostaies the peacocks symbolise pride. The doves symbolise peace, the octopus with the shells symbolises fasting, which is an important part of the Orthodox religion.

On the first row of the iconostasis at the bottom side, you will see flower pots and filled vases. On the top side you can see the icons of the Virgin Mary Panagia, Jesus Christ, Saint Ioannis Prothromos, and the silver plated icon of Agia Marina, which is renowned for its miracle working.

During the olden times, people were coming from Constantinopole and Russia to pay their respects to this icon. One of the offerings from Russia is the golden embroidered tomb cover, which is situated on the right wing of the temple.

On the next row, we can see sacred paintings and Byzantine art and icons, relating to religious name days, which were painted by Monks from Agio Oros "Athos" (which means Holy Mountain), during the 17th century.

On the last row you can see Byzantine icons illustrating scenes from the Old Testament. The three sections of the temples' roof are separated by columns that are wooden (from chestnut) and are covered in plaster.

They are painted with geometrical forms, so that they actually look like one-piece columns. On the arches you can see sacred paintings of the Prophets, Saints and various other decorations. On the right wing on the ceiling you can see the sacred painting about Jerusalem. On the left wing on the ceiling, the monasteries of Athos and Meteora are represented.

In the church there is a section that is allocated to the lives of women in olden days. There are many illustrations depicting scenes from these times. One of these illustrations depicts punishment because the people involved were not responding the call of the Priest to come to church.

One painting depicts the adulteress woman and her punishment. In another there is the image of the tree of purity in conflict with non-confessing people.

Another is the telling of a "fake" confession where the true sin is hidden.Many of these paintings have stories behind them, and one such picture is "The Evil Metamorphosis".

This depicts a woman wearing domestic clothing and looking into a mirror which the devil is holding for her. The devil then starts exaggerating about the womans beauty, making her feel more confident and beautiful than she really is. The purpose of this story is to depicts how one's ego can bring out the worst in people, instead of that person's good side.

The church of Agia Marina in Kissos, Pelion, is open everyday of the week. If you need to contact the priest of the church, please use either of the following telephone numbers ...


Location of the Church of Agia Marina

Click on the map image below to load the Google map showing the location of the church. 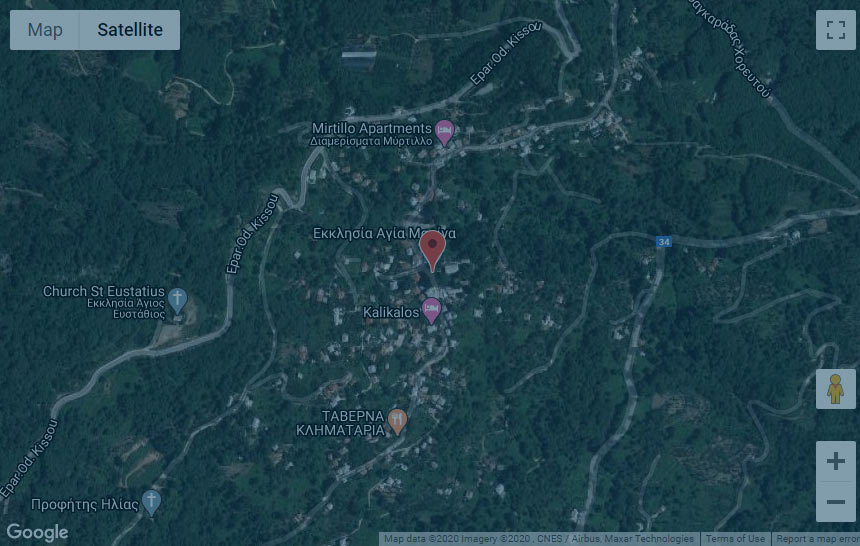