The Public Library of Milies

Located in the beautiful village of Milies, which is approximately 28km from the city of Volos, is this extremely important and interesting library. Houses in a tall building that was built in 1928, the Old Library of Milies is an attraction that all travelers to Pelion should visit.

The library is located close to the main square of the village, near to the church of Agioi Taxiarches. It was founded in 1814 in the form of a school that was in turn linked with three very famous and important scholars, all of whom were born in Milies. They were Αnthimos Gazis, Grigorios Konstantas and Daniel Philippides.

The original purpose of the school was to be an academy, similar to a university, but this was refused by the Ottoman rulers. Construction of the school was completed in 1817 with financial donations being made by the founders. The Revolution of 1821 lead to the school ceasing to operate, as the founders were among the leaders of the revolution in the fight against the Turks.

In 1834, with the help of Grigorios Konstantas, the school reopened and operated for thenext 10 years until 1844 when Konstantas died.

In 1828 the current library was built with help of a donation made by Milies resident Crystallia Ikonomaki, in memory of George, her late husband. The library was to house many of the surviving books, instruments and artifacts from the school. However, during the Second World War in 1943, German forces set fire to Milies and most of the schools’ collection of books and artifacts were destroyed.

In the historic section of library are around 1700 titles of a variety of historical books and publications from 1497 up to 1899. In 1955 the Library of Milies was made public, and in 1974 the original building was renovated, with a second floor being added.

Visitors to Pelion are more than welcome to pay a visit to the library where they can see a unique collection of old documents detailing the Greek Revolution. There are also a wonderful display of old books, maps and chemistry and physics instruments. There is also a Public Information Center at the library with free internet access.


Location of the Old Library of Milies

Click on the map image below to load the Google map showing the location of the library. 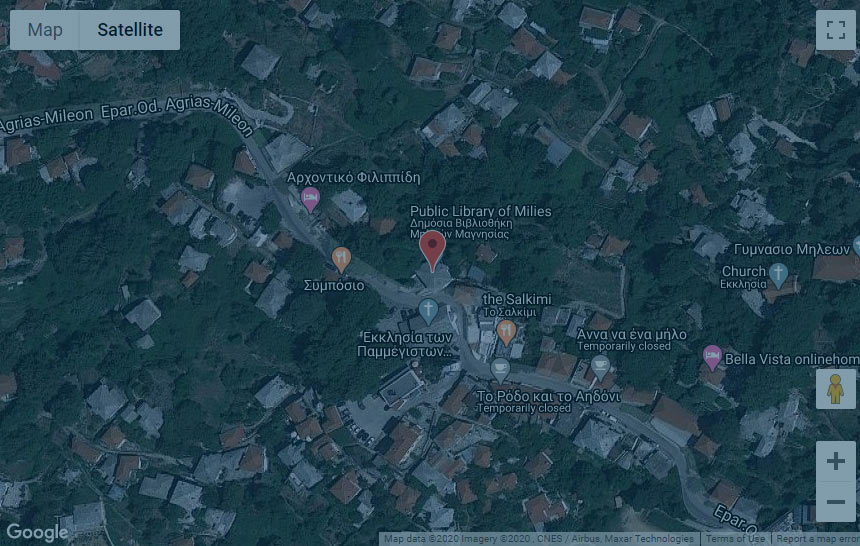